If you're a regular reader of my blog, then you'll know that when I do a "Top 10" list, I take a poll on various Facebook Horror Groups and Pages as well as the Maven's Movie Vault of Horror Facebook Page.

So I thought it's about time that I did MY very own Top 10 list. As a horror fan for most of my life and the fact that I watch at least one horror film a day (whether old or new), it's pretty damn hard to come up with a definitive list as there are too many films to choose from the shit load of favourites I have anyway. In order to come up with this list I've had to go with what, over 25 years or so, I've watched the most. Let's face it, you're not gonna watch something over and over again if you don't like it! I'm also gonna share with you my favourite scene from each film.

Bare in mind I'm 36 years old and besides watching Hammer Films as a kid, it wasn't till the late 80's when I really started to pay attention to horror and thereafter my obsession began. The Number 3, 2 and 1 spots are my most influential films on the list. 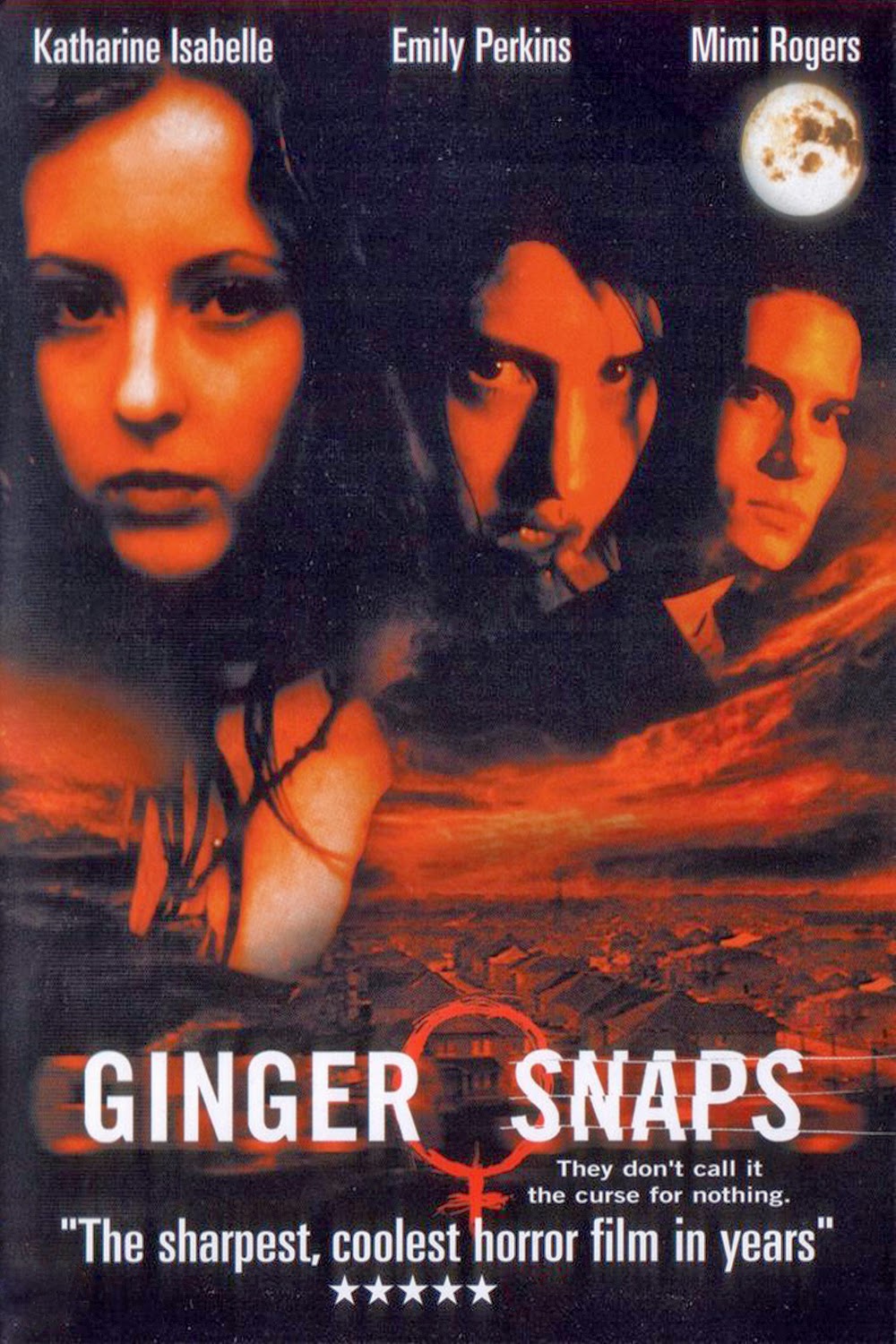 This slick and very cool film tells the tale of two death-obsessed sisters that are outcasts in their suburban neighborhood. When one of them is bitten by a deadly werewolf they must deal with the tragic consequences.

I was first introduced to this film by an ex in the early 00's. After watching it a handfull of times it soon became my goto film to put on in bed, for pretty much every night for about 2 or 3 months!

This is also one of my favourite Werewolf films.

Here's the scene were Ginger goes from shy reculse to high school hottie. 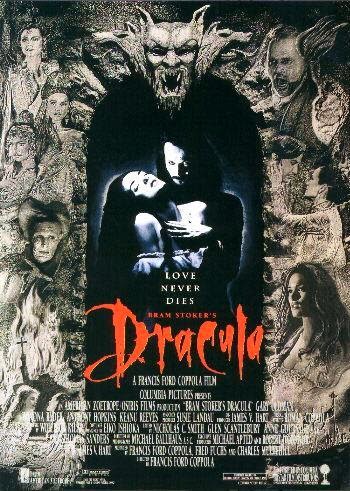 Bram Stoker's classic novel is brought to life by Francis Ford Coppola and an all star cast including Gary Oldman as Dracula, Anthony Hopkins as Professor Abraham Van Helsing and Winona Ryder as Mina and Keanu Reeves as Jonathan Harker.

My only gripe with this movie, being an Englishman myself, are Reeves' and Ryder's dodgy English accents! Other than that, I love Coppola's vision as the imagery is stunning.

I loved this film so much that I owned it on VHS, DVD and had the novel and sountrack. It's also one of my favourite Vampire flicks, but it's not the only one in this list.

As the Vampire sub-genre is my favourite within horror film, there will be a couple more making an appearance.


Here's Johnathan meeting Dracula's brides for the first time in a very sinister but sensual scene... 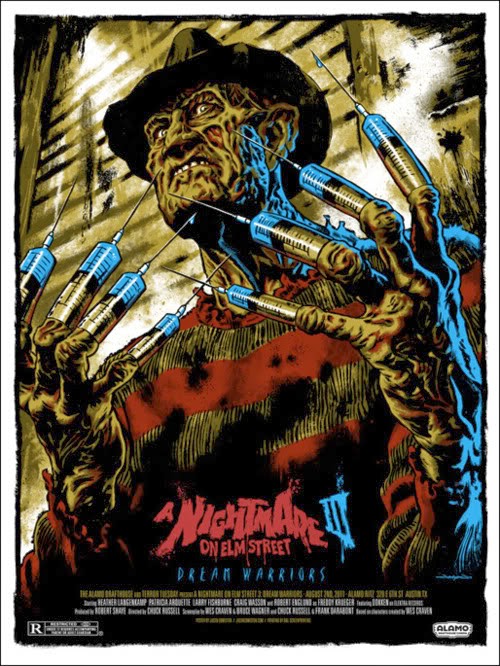 The 3rd installment in the Nightmare on Elm Street series sees Freddy Krueger haunting the dreams of a group of kids that learn to take control of their dreams in order to fight back against the terrors that Freddy brings.

Watching this as kid of around 12 years old, my small group of friends and I thought this was the coolest thing we ever saw.

Heather Langenkamp and John Saxon return to play father and daughter as well as the legendary Robert Englund in the role that made him horror royalty.

My favourire part of the movie is the puppet scene which you can find below. 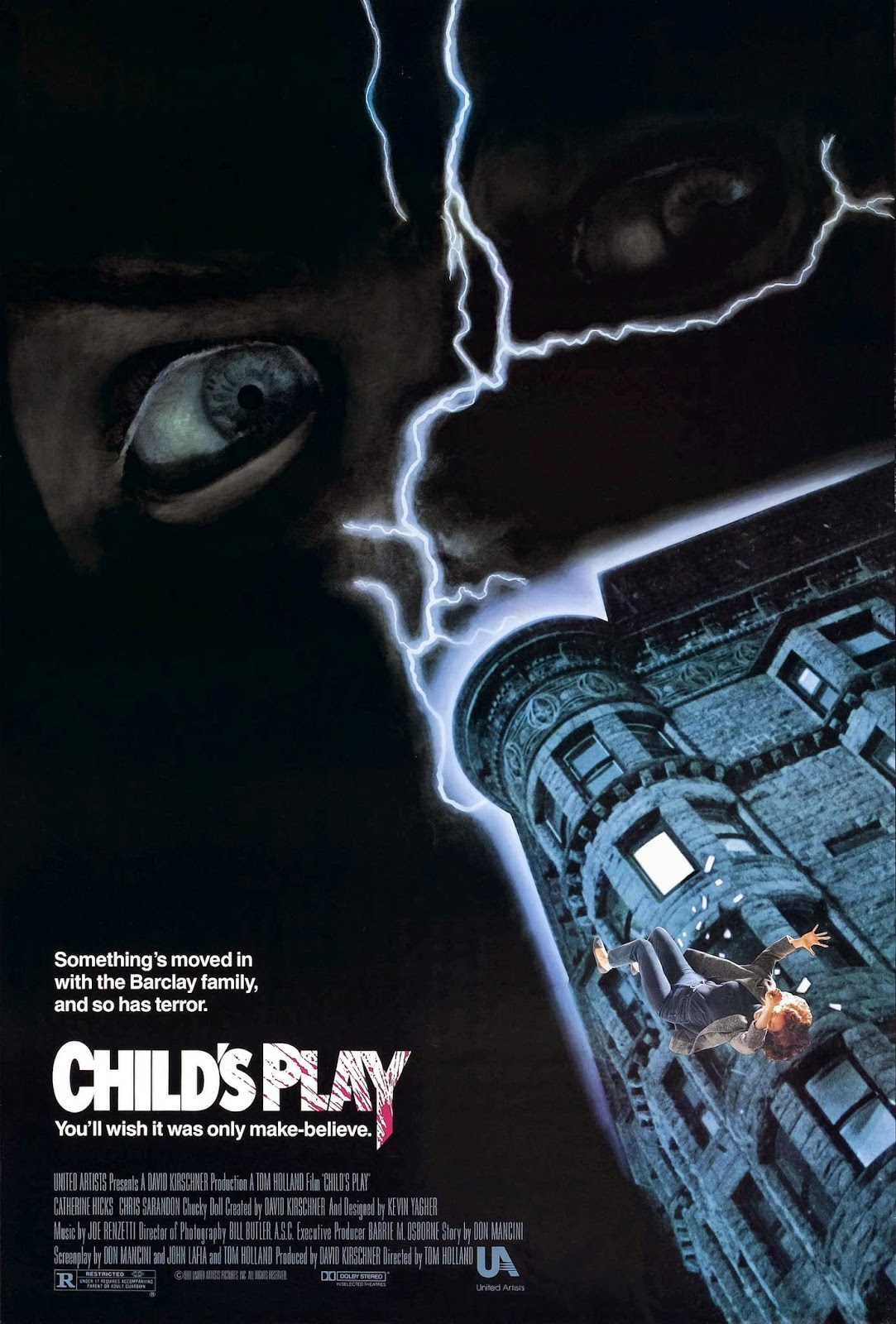 Single mother, Karen (Catherine Hicks), gives her son a beloved doll for his birthday, only to discover that it is possessed with the soul of the serial killer, Charles Lee Ray (Brad Dourif).

Yes, the cute and murderous Chucky holds a place in my heart and in my top 10.

When I watch this film it still gives me the creeps to this day! The rest of the series failed to do that till the recent Curse of Chucky (2013), which was surprisingly good.

My favourite scene is near the end, when Chucky goes ape shit, getting real nasty and brutal. 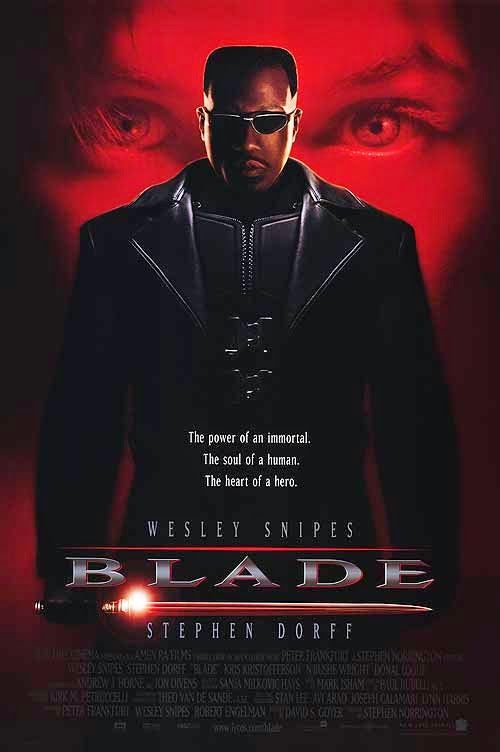 Blade (Wesley Snipes) is a half-vampire, half-mortal man on a mission to rid the planet of vampires. With all the strenghs of a vampire and only one weekness, "the thirst," he slices and dices his way to Deacon Frost (Stephen Dorff) who has plans to awaken a Blood God.

This may be a surprise to some of you that this is in my top 10, but there's a very good reason.

Back in '98 I was on holiday in central Florida with 5 friends. We wanted to go the cinema. The nearest one was the AMC Downtown Disney. My friend suggested Blade. All we knew was that Snipes was in it and it had vampires in. I was sold.

The whole experience really added to my love of this film. I even have a Frost vampire "glith" tattoo on the back of my neck!


As soon as it hit DVD in the UK I went out and bought it. In fact, it was the first DVD I ever bought and I watched it so much that I wore the disc out! It still has one of the greatest opening scenes I've ever seen in a vampire flick. Check it out... 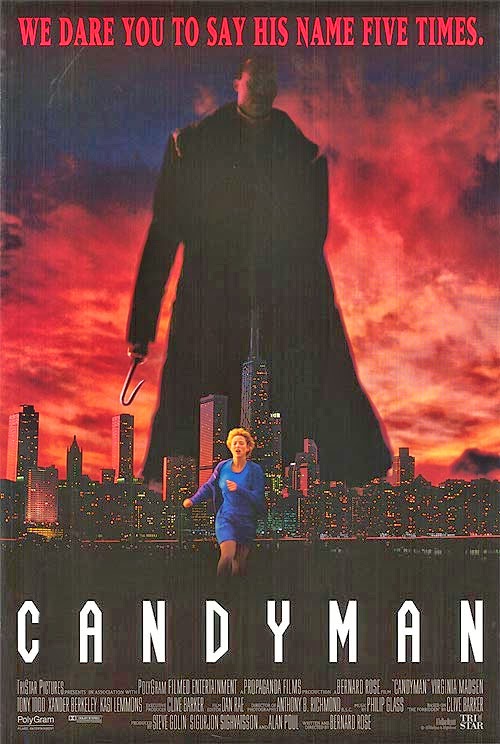 If you've just read the above while looking in a mirror, well, YOU'RE FUCKED! Or not. The question is, have you ever tried it? "Have you?" I hear you ask. HAVE I FUCK! My movie warped mind is far too damaged for that kind of behaviour.

The Candyman aka Daniel Robitaille is bought live by the legend that is Tony Todd. Say his name 5 times into a mirror and the hook handed killer appears. This myth is tested by the skeptical grad student Helen (Virginia Madsen) with disastrous effects.

The overall tone of the movie is what I love about it. The eerie score and theme tune play an important part adding to the tension throughout. Here's Helen's first meeting with Candyman... 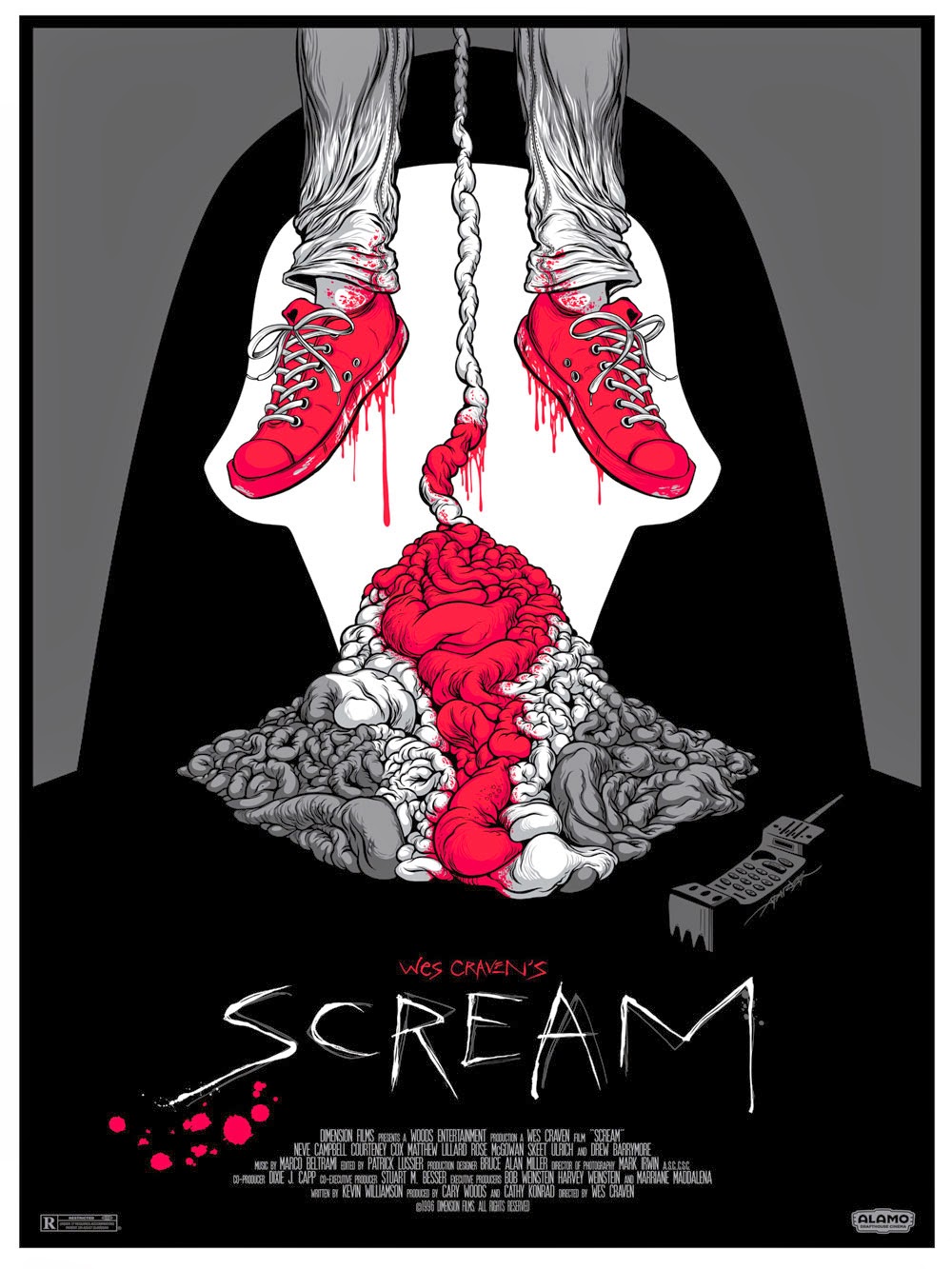 I consider Wes Craven's Scream to be one of the most important horror films of the last 20 years. It not only revitalised the slasher sub-genre, but broke all the rules by revealing the rules of a horror movie.

With referrences to over a dozen other horror flicks and the help of Randy's (Jamie Kennedy) "rules," it gave the audiance an insight into the genre that no other film had done before.

It was the first slasher that I had gone to see at the cinema and after buying it on VHS, I watched it that much that I could resite the entire film, word for word perfect. I even had the full costume, which was great fun when I whore it around the pubs one Halloween night in my local town. Let's just say lots of girls were scared that night, plus one bouncer.

With a very cool cast that delivered memorable performances, the miss direction from Craven had you thinking the killer could be one of at least 6 or 7 different people before the final reveal and it made answering the phone at night seem like a gamble with death!

Here's the final reveal scene near the end of the movie. If you haven't seen Scream, then look away now... 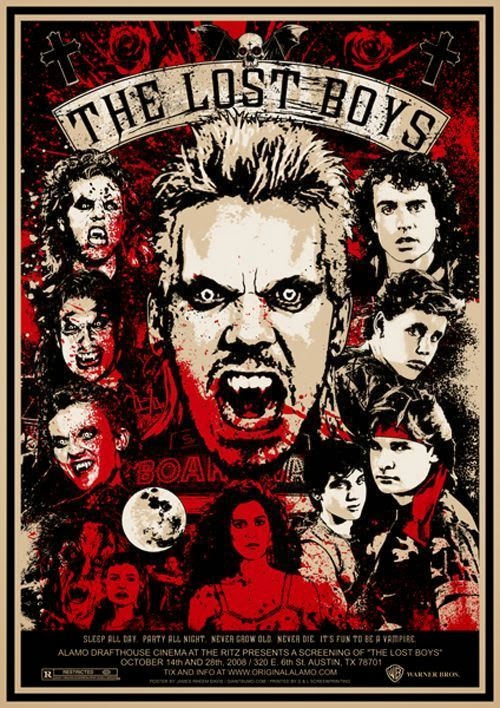 Besides the Hammer Films vampire flicks I watched, The Lost Boys was first vamp film that got me into the sub-genre. It'still one of my favourite films.

A mother and her two sons, Michael and Sam (Jason Patric & Corey Haim) move to a small coast town in California. The town is plagued by bikers, led by David (Kiefer Sutherland), and some mysterious deaths. The younger boy makes friends with the Frog brothers (Corey Feldman & Jamison Newlander) who claim to be vampire hunters while the older boy is drawn into the gang of bikers by the beautiful Star (Jami Gertz).

The all star 80's cast played their roles to perfection in what's arguably one of the greatest vampire movies in hostory. It still boast some of the best vampire SFX prosthetics.

My favourite scene is of course the reveal to Michael. All the boys are perched in the tree about to feed on a group of people on the beach. The tree is backlit as they watch thier prey and it looks almost magical. Here it is... 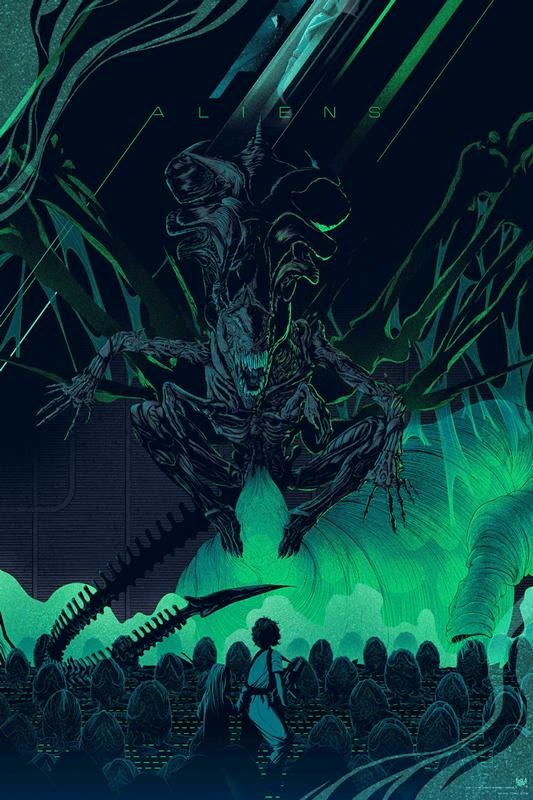 Fifty seven years after Ellen Ripley (Sigourney Weaver) survived her disastrous ordeal, her escape vessel is recovered after drifting across the galaxy as she slept in cryogenic stasis. After being recovered and woken, nobody believed her story about the Aliens on the planet LV-426. After, the Company orders the colony on LV-426 to investigate, however, all communication with the colony is lost. The Company enlists Ripley to aid a team of space marines on a rescue mission to the now partially terraformed planet to find out if there are aliens or survivors. As the mission unfolds, Ripley will be forced to come to grips with her worst nightmare, but even as she does, she finds that the worst is yet to come.

I actually watched this before watching Alien, which I also love. I still consider this movie as one of the best Sci-fi Horror flicks.

The "Xenomorph" design was created by artist H. R. Giger and is still one of the most recognisable alien creatures ever created on film.

My favourite scene, which I couldn't find on YouTube, is right after the auto turrets run out of ammo (Director's Cut) and the Marines are still picking up movement in the room even though the doors are sealed. So Hicks (Biehn) takes a look above though the open ceiling grate and the Xenomorphs are right on top of them before falling through the ceiling. So instead, I found Hudson's (Paxton) best bits as he did have all the best lines. It does actually include a little bit of the scene I mentioned around the 5:20 mark. Check it out... 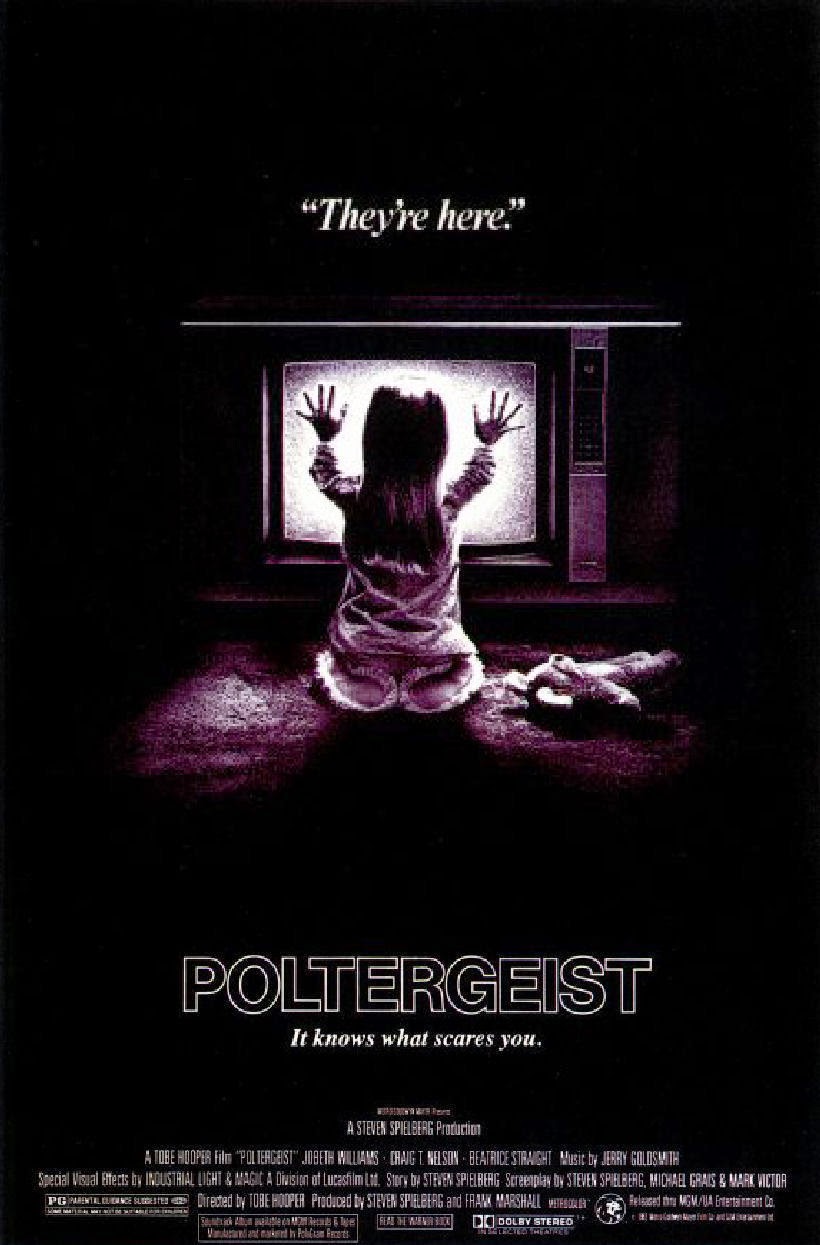 This supernatural flick scared the shit out of me when I was a kid as I was only 11 years old when I first watched it. When I watch it now-a-days certain parts still freak me out and I still never let the TV go "snowy" for more than a couple of seconds before turning it off!

The story follows the Freeling family that witness strange events in their home which lead to the disappearance of the youngest child, Carol Anne (Heather O'Rourke). They enlist the help of a psychic called Tangina (Zelda Rubinstein), who's creepy as hell in her own right.

Shortly after filming the third instalment of the franchise Heather O'Rourke died at the tender age of 12, February 1st 1988. The casue of death was cardiopulmonary arrest and intestinal stenosis.

Here's 3 of my favourite scenes...


Well, there you go. I hope you enjoyed a little insite into my taste and my favourite horror flicks. This has got me thinking about doing another list so stay tuned for that. It's going to be a top 10 best films of the last 10 years.

Thanks for reading guys.
Posted by Mad Mike at 15:46