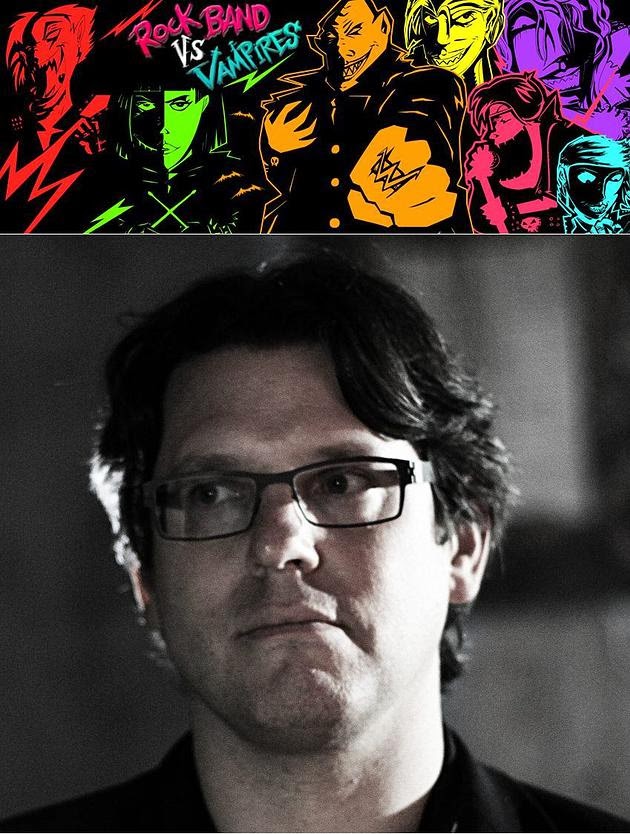 Rock Band Vs Vampires is currently in production, and due to be completed by Summer (2014).
The film is an independent comedy-horror feature film intriguingly combining the worlds of vampires and Camden’s music scene. I was fortunate enough to get an interview with the man at the helm of the project, director Malcolm Galloway.

Can you tell me a little bit of back ground information about yourself that you feel horror fans should know?

Malcolm: "I’ve been a pathology consultant to ITV’s Murder On The Homefront. That was interesting – helping make their historical autopsy scenes look accurate. It was being on set for that, and also the filming of a music video for my band last year that got me thinking about making my own films."

What inspired you to make Rock Band Vs Vampires?

Malcolm: "The band in the film (Sorcerer’s Tower) is based on my real-life band (Hats Off Gentlemen It’s Adequate – www.fb.com/itsadequate   www.reverbnation.com/itsadequate  www.youtube.com/itsadequate ), and we are using some of our music from our first album, Invisible, in the film. My aim was to make a film in which the rock band aren’t big swaggering heroes playing in stadiums, but normal, insecure people playing to tiny audiences in local venues, who then get embroiled in an attempted vampire take-over of Camden in London. I’m drawn to characters who are lost and out of place, whether it is the band, who want to make music, but aren’t really getting anywhere, to the vampire Winterford, whose powers are fading after centuries of being a top predator."

What can we expect from Rock Band Vs Vampires?

Malcolm: "I hope it will be a lot of fun. One of our actors described it as ‘funny, sexy, exciting and action packed’."

Did you hand pick the cast yourself and was there anyone in particular you had in mind when writing a certain role?

Malcolm: "Yes – the cast were all hand-picked, and I’m delighted to be working with such an amazing group of actors. Some are well known – such as the broadcaster Gyles Brandreth and the comedian Richard Herring. Some are experienced specialist horror actors, such as Dani Thompson and Angela Holmes. Others, including myself, are relative newcomers to acting. The roles for Loren Peta (Pixie Coldwell) and Jake Rundle (Dan Coldwell) were written specifically for them. Their characters join mine to make up the rock band. We’d worked together on a short film previously (Badgergeddon - http://youtu.be/DfREuqIrwtw), and I loved their performances. Their characters in RBVV are based on the characters they play in Badgergeddon. In both films they play brother and sister. Generally in the film the female characters are much more effective people than the male characters. Winterford is entirely dependent on his PA/partner Angelica and Pixie is the only one in the band who is remotely practical. I’ve found it much easier to write for someone whose voice I know, and to imagine what the characters would do once they had faces. I revised the script following casting and after discussions and rehearsals with our actors."

What was it like working with such a wealth of varied cast members?

Malcolm: "Amazing. This is my first experience of making a feature film, and it has been an absolute pleasure to see the individual performances of the actors bringing these characters to life."

Besides your previous work, Mask, being a short film what's the biggest difference you've noticed between that and Rock Band Vs Vampires? (i.e. the process of filming, writing, direction)

Malcolm: "It takes a lot more co-ordination, and I’m extremely grateful to our production team, headed by Loren Peta, our crew, led by DOP/co-director Raed Abbas, our stunt team led by Dan Abrams,  our make-up/SFX specialists, and all of the team of over 200 people who are contributing to the project."

On a personal note, I love Rock/Metal and my favourite sub-genre of Horror is Vampires. I can't think of a better combination! I can't wait to see this film. And on that note, are you aiming for a festival run or looking to go straight for a general release?

Malcolm: "We’re aiming to make the film as widely available as we can – cinema, DVD, VOD, as well as a spin-off computer game, probably a novel, and maybe graphic novels."

Have you any other projects in the pipeline?

Malcolm: "We’re planning the sequels. Our co-director Raed Abbas has directed a feature film (Cut), which is in post-production. I’ll be involved in helping to get this ground-breaking Arabic language comedy-horror-action feature film to the wide audience it deserves. I’ve got a variety of other film ideas I’m working on as a writer. I also need to finish off our 2nd Hats Off Gentlemen It’s Adequate album, which is about artificial intelligence."

Is there anything else you would like to add?

Malcolm: "I’m extremely grateful to the amazing team that has come together to make Rock Band Vs Vampires a reality. It is a privilege to be working with such a wide range of talented and passionately creative people from such a variety of nationalities and cultures. There is a lovely atmosphere of a supportive RBVV family. I’m very grateful to my wife Kathryn and my kids for all their support and encouragement."

I wanna say a big thank you to Malcolm for the interview. I'll be keeping a close eye on the progress of the film, so stay tuned for more info as it comes. In the meantime you can read a previous interview with star Dani Thompson HERE

Jeremiah Winterford is an old-fashioned vampire who finds himself awkwardly out of place in a modern world. Forced to move from Winterford Manor following a torching by his vampiric rival Jako Van Zyl, Winterford and his surviving acolytes find themselves making a new home in Camden (London's musical capital). Where better for a vampire to hide in plain sight?

Sorcerer's Tower, an unsuccessful prog-rock band are booked to play at the re-opening night of a Camden venue, now under new (vampiric) ownership. Armed with their instruments, can the band save their small number of fans from an eternity of vampirism?
Posted by Mad Mike at 20:14