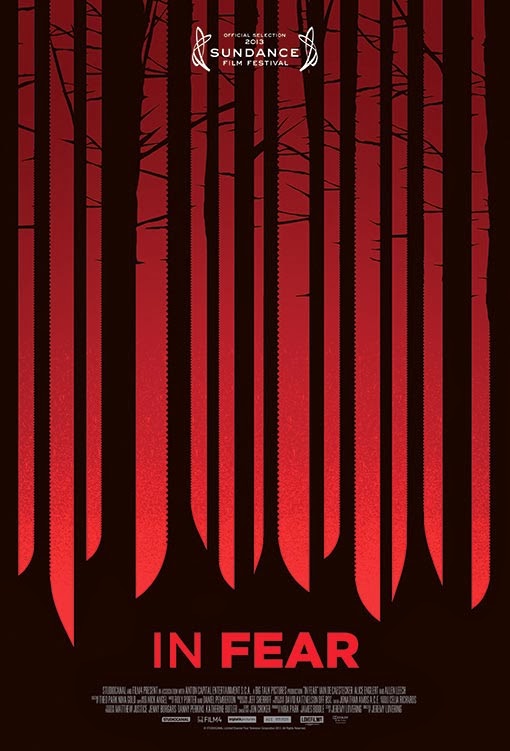 The most terrifying thing to man or woman after loneliness is fear itself, it may help us to make rational thoughts to deliver positivity however Fear itself has 2 sides. There is an psychological effect which can fester terror and in Jeremy Lovering's In Fear that fear is delivered in it's simplest most effective form, well almost.

In Fear is the feature directorial debut for veteran TV director Jeremy Lovering starring British upstarts Ian De Caestacker (Agents of S.h.i.e.l.d) and Alice Englert (Ginger And Rosa).They play Tom and Lucy a young couple in the early days of their relationship and heading to a music festival somewhere in Ireland. On the way to the festival venue Tom surprises Lucy by booking a night's stay at a near by country house hotel. Reluctantly Lucy agrees to go and en route to that hotel the pair follow the signs frustration takes over when they seem to be going round in circles terror takes over when darkness falls the penny drops when the couple believe someone is playing tricks on them.

In Fear is a lesson on how to deliver the maximum effect on screen with the minimalist of resources. We dive head first into our primal fears as if we are experiencing the emotions Tom and Lucy are experiencing. Things do seem to work largely thanks to improv skills of our young leads who are drip fed snippets of what lay ahead for them help making their fear, genuinely convincing.

As the roads tart to encroach our young couple, tensions rise paranoia strikes as things go missing making things intense most of all claustrophobic. As Tom and Lucy are pushed to their limits the fabric of their relationship disintegrate, mysterious Max (Allen Leech) appears this is when In Fear unravels.

The last third of the film becomes cliched, outlandish even very predictable which is a crying shame as De Caestecker and Englert deliver strong raw performance.. In Fear may not deliver anything remotely new  in plot what it does do is deliver a film full of atmosphere, tension spoiled by a frustrating ending.