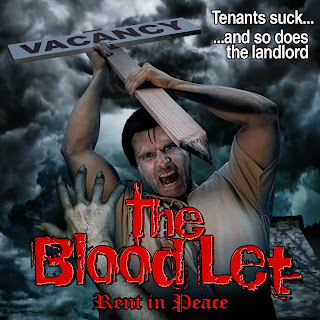 The Blood Let comes from Indie director/writer J.R. McGarrity. The story follows Ex-cop Gus (Rollin Blanton), after his ordeal with a fatal shooting, he's taken a job as a resident manager of a creaky old apartment building, The Royal Vista.

As if the crazy old landlord Wang (Clint Jung) wasn't bad enough, Gus also has to deal with the tenants and their problems. While this is going on, he also attends therapy. Things are made worse when he has to clear out the attic of a dead body and clean an apartment ready for rent.

With very little interest and pressure from the landlord to rent the apartment, Gus ends up renting it at 3 o'clock in the morning to a rather mysterious couple, Star (Elise Jackson) and Connor (David Landry). But this ends up being a life threatening mistake as the new found tenants are vampires! 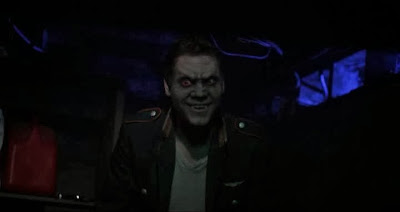 The acting isn't great, but on the comedy side, Clint Jung as Wang steals the show. Keep an out for the guy in the garbage bin in too. The best performances come from Elise Jackson and David Landry as the vampires.

I liked the feel of the direction, but the script could have been a lot stronger. The best aspect of the movie was the story itself. I found it original and refreshing. I have to admit, I really enjoyed this low budget Indie comedy horror. You can check out the trailer below HERE.