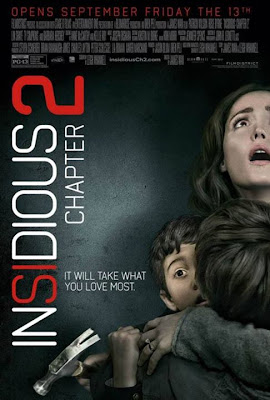 I watched Insidious when it first came out back in 2010, then again for only the second time today, a couple of hours before going to see Chapter 2.

While I liked the first film, I wasn't overly impressed with it, but having loved The Conjuring I was looking forward to seeing what James Wan would do with his sequel, as he also directed the first film.

If you haven't seen Insidious then there will be a couple of spoilers.

As this sequel directly follows the events and time line of Insidious, there's no long drawn out character development, so we're straight into the story, frights and thrills.

We're treated to a look back into the past at the beginning of the movie, when Elise Rainier (Lin Shaye) first meets a young Josh Lambert (Garrett Ryan) in an attempt to help with his haunted problems (this ties in with the storyline later in the film). Back to present time, before Elise's body is even cold, the Lambert family have moved out of their house and into Josh's mother's, Lorraine Lambert's (Barbara Hershey) home.

It's not long before strange things start happening again! With Renai Lambert (Rose Byrne) reporting the events that happened in the old house to the police, she's now unsure of Josh's involvement in Elise's death. But as time goes on, Josh (Patrick Wilson) starts acting more out of character.

Meanwhile, paranormal investigators Tucker (Angus Sampson) and Specs (Leigh Whannell) try to make sense of the situation by checking out Elise's house. They connect with Lorraine Lambert, as she has also been seeing disturbing things. In the process, they meet with one of Elise's old friends, Carl (Steve Coulter). As they dig deeper into the past, the truth becomes clear and helps them determine what's going on with the Lambert family. But the more the facts are revealed, the more danger the Lambert family and everybody else is in!

With the story following straight on and all the characters returning, it's easy to get into the movie. If you liked the first flick, then you'll like this one even more. It has flash backs to when Josh was about Dalton Lambert's (Ty Simpkins) age and has crossovers within the two time lines. These can seem to be drawing away from the main story, but everything ties in together by the end.

There's not just the returning characters, we're also introduced to a few new ones. Steve Coulter is a great addition to the cast. Tucker (Angus Sampson) and Specs (Leigh Whannell) once again provide us with a couple of comedy moments to lighten the mood. But it's Patrick Wilson that provided the standout performance in Chapter 2 for me.

I really did enjoy the story a lot more. I can only put that down to James Wan adding his touch to it, instead of Leigh Whannell going it alone, even though he still did a great job writing the screenplay. And as always, Wan does a solid job as director, provided us with jumps and frights. As for the VFX, there's nothing new here, but they're still practical and effective like the earlier flick. The score helps with the frights, the mood and tension of the film.

Lets not forget the fact that this produced by Jason Blum's Blumhouse Productions and everything he touches turns to gold, so I'm expecting high box office figures for this sequel.

So overall, Insidious: Chapter 2 is by no means a perfect movie. It's not even the best horror film I've seen this year, but it would make an appearance in my top 10 of 2013. The scares aren't the best, they may make you jump, but it relies more on the score to give it an edge and there is a little too many door slams. However, I am pleased to say that it surpasses it's predecessor (I would give Insidious (2010) 3.5 Stars).


POSSIBLY ONE OF THE BEST HORROR SEQUELS IN THE PAST 10 YEARS, INSIDIOUS: CHAPTER 2 IS FRIGHTFULLY FUN AND EERIE. JAMES WAN ONCE AGAIN PROVES TO BE THE GO-TO DIRECTOR FOR HORROR!