Behind the Cross (Short Film Review) 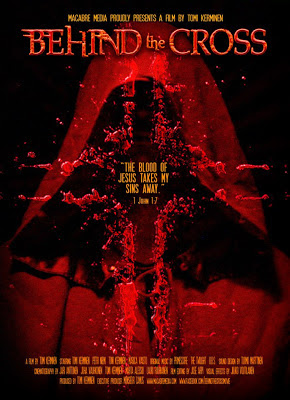 Religious psychological horror short, Behind the Cross, is produced, written, directed by, and stars the multi-talented Tomi Kerminen.

A priest with a disturbing past and a dark side delves into a world a depravity, torture and murder. Has his god forsaken him? Or is he in the hands of the Devil? Piggy (Petri Niemi) and the victims are all at the father's mercy. Will he be forgiving, or will they pay the price for the mind of a mad man?!

The main thing that stood out for me during the film was the soundtrack and creepy score. Both were used to great effect. The VFX are kept to a minimum, but while being subtle they were still effective for a low budget project. The acting, again, is very subtle. The short concentrates on the visual side of things, giving the viewer disturbing and confusing images.

If you're like me and like your horror strange, disturbing and leaving you feeling like you've had your mind raped, then this is worth checking out!