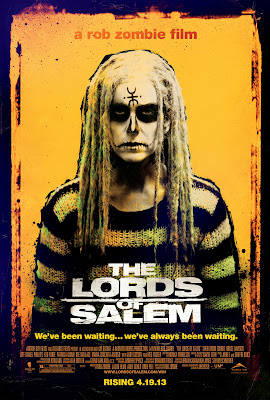 Rob Zombie caused a lot of controversy within the horror community and caused quite a split in opinion with his vision of Halloween I and II. Where as his first two films, House of 1000 Corpses and The Devil's Rejects where received a lot better. I personally, am a fan of his work (more so his films than his music) and was looking forward to seeing what original project he would do next. I've been following the progress of The Lords of Salem since it was first announced way back in September 2010.

When it was first screened on the festival circuit, again, it had a lot of mixed reviews. This was something I was expecting, so it didn't put me off in pre-ordering the DVD on April 9th as it was to be released April 22nd here in the UK. This came as great news because, in both the UK and the US, it was only to receive a very limited theatrical run.

Needless to say, my copy arrived yesterday morning and I sat down to watch it last night.


The movie starts with an introduction to the original coven of Salem witches back in 1696. Margaret Morgan (Meg Foster) is the head of the heretic coven and is leading the group of six in a naked frenzy of Santanic worship. Cut to present day, Heidi Hawthorne (Sheri Moon Zombie), a recovering addict, is waking up and starting another day DJing on the radio along with fellow members of the Big H Radio Team, Herman 'Whitey' Salvador (Jeffrey Daniel Phillips) and Herman Jackson (Ken Foree). Before leaving the apartment, she notices that someone has moved into apartment number 5. Heidi says hello, but is ignored.

After a long day at work, the three of them are ready to head home. On the way out past reception, Heidi has a wooden box waiting for her which contains a record by a band called The Lords. She takes it home to listen to. Upon listening to it, Heidi is put into a trance like state and we are thrown back to 1696 and witness more of the witch's ritual.

The next day on the radio show, the three hosts are interviewing the author of 'Satan's Last Stand - The Truth About The Salen Witch Trials,' Francis Matthias (Bruce Davison). At the end of the interview, the record that Heidi received the day before is played over the airwaves and catches the attention of Francis, among other listeners.

That same evening, as Heidi arrives back tat her apartment, she is invited to share a glass of wine with the landlady Lacy (Judy Geeson) and her friends Megan (Patricia Quinn) and Sonny (Dee Wallace). After being freaked out by the trio of elderly ladies, Heidi heads up to her own apartment to get her down in bed. Her wake is interrupted by her own coughing and while getting up to get a drink she notices that her dog is outside barking at the door of number 5. She retrieves the dog, but then investigates what's behind the door inside apartment 5. This is where things start to take a turn for the worse and Heidi's life starts to spiral downward into the bizarre, with disturbing visions at the hands of dark forces.

Right, not everyone will like or appreciate what Rob Zombie has done here and that includes his fans. It's very different from his previous work. I, on the other hand, did like it! If you buy the UK DVD, just be aware that there are no special features. You can order it here.

My only major gripe with it was the fact that, once again, Sheri Moon Zombie is in a predominant role. However great she's been in past roles, she just isn't strong enough to lead the film. Luckily she's surrounded by a solid and experienced cast. Meg Foster especially was brilliant . Every time she was on screen she gave me the creeps!

The film is very weird throughout. But with that comes some stunning imagery and fantastic cinematography underlined by a superbly foreboding score. With the the two elements of score and visuals mixed together, parts of the movie reminded me a little of Stanley Kubrick's work. The whole movie is very "art house" and also has a 70s feel to it and at one point I was even reminded of John Milius's Conan the Barbarian (1982)! Yes, strange, I know.

This is more than a simple horror movie. Rob Zombie's disturbing vision filled the screen with every scene and was accompanied by an equally disturbing score from newcomer composer Griffin Boice and long time metal guitarist John 5.


DISTURBINGLY EVIL & UNSETTLING WITH A TWIST OF BIZARRE VISUALS AND A BEWITCHING SCORE, THIS IS A MOVIE FOR GENUINE FILM BUFFS AND NOT JUST YOUR AVERAGE HORROR FAN.