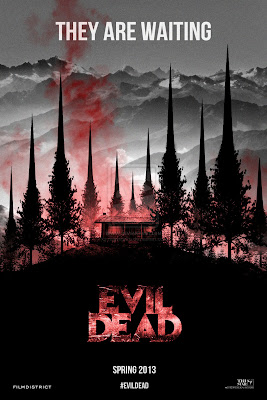 I have to start off by saying that I was never a massive fan of the original The Evil Dead. Yes, I know, I can hear the boos from here! However, I did like it and thought it was enjoyable, despite it's campiness, and accept it's cult classic status. The 2013 version felt more of a re-imagining than an all out remake though.

I also accept that whatever and however this movie turned out to be there was always going to be fans of the original that hate it, whether for genuine reasons or the fact that they are arseholes that are just going to hate because it's "a remake and all remakes suck" and they like to piss and moan about remakes bla bla fucking bla!

There will be a certain amount of spoilers, but lets face it, it's based on the original, we know what's going to happen, and quite frankly, if you haven't seen the original being of the generation that should, then you need shooting!

Anyway, I digress, back to the film...

The opening scene sets the mood straight away with a young girl being chased through the woods. She's caught by a couple of backwoods hicks and dragged to a cabin, tied up to a post and set on fire. I'll leave the small details out as to not completely spoil it, but let's say it's a good start to the proceeding.

It then cuts to present time, as the main cast is arriving at a cabin in the woods, which is actually an old family getaway that belongs to Mia (Jane Levy) and David (Shiloh Fernandez). Along with the two sibling is David's girlfriend Natalie (Elizabeth Blackmore) and old friends Olivia (Jessica Lucas) and Eric (Lou Taylor Pucci). They are all gathered to help Mia kick her drug addiction as she attempts to go cold turkey.

A few hours pass as they all try to settle in the cabin and the symptoms of cold turkey start to hit Mia. She complains of a smell that is driving her nuts and eventually David finds a trap door under a rug. They go down into the darkness to investigate. What they find creeps them all out! However, Eric finds something far more interesting. No prizes for guessing what it is though. It is of course Necronomicon Ex-Mortis, an ancient Sumerian text, or simply The Book of the Dead.

Needless to say, being somewhat of a geeky teacher, Eric sits down and studies his way through the book and without realising he unleashes the forces of hell. Let the fun begin...

Let's get the negative points out of the way first. The plot is rather thin and even with the good opening scene it felt a little weak in the build up as there's not a great deal of character development other than Mia and David. You never really get attached to the characters in order to care about them so I found myself waiting for the real action to start which is nearly half the movie. That said Mia does come into her own as the movie goes on.

The second half of the movie totally makes up for any and all weakness that the film began with. The further the film progressed, Jane Levy's performance went from strength to strength. We see Mia as her normal self, pre-cold turkey, to the ill effects of cold turkey, to the full on possessed and back again, which led her to be a pretty damn good final girl. In fact, the acting all round was solid, there was no weak links.

With the great score and the set up to the more notable scenes, it was a genuinely creepy movie. Some of the more gory scenes could possibly make you uncomfortable. Now, the gore, this is what makes this such an awesome film. With barely any CGI, the VFX are absolutely fantastic which makes for a more realistic and enjoyable viewing. And because of that, this is possibly the most bloody and gory horror I've seen to date!

I give great credit to Fede Alvarez for his direction. He went his own way with the his script, but still threw in a few nods to the original, although that had more to do with Sam Raimi and Bruce Campbell. Each character even had a little "ASH" in them, which was great.

Despite the slow start and the little faults, I'm still going to give this the rating I'm going to give. Why? Because it was that enjoyable! After watching the movie, I mentioned this yesterday on Maven's Movie Vault of Horror on facebook, but I'm going to go the full hog and say it here - Evil Dead is the best modern remake I've see to date! Whatever you do, stay through ALL the credits, right to the very end, even when the credits disappear. You'll find it groovy!


EVIL DEAD IS A DISTURBINGLY CREEPY BLOODY GOREFEST OF VIOLENT BRUTALITY.
YOU MUST SEE IT!