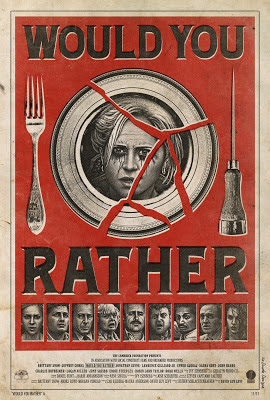 Iris (Brittany Snow) lives with her ailing brother Raleigh (Logan Miller), who has leukaemia. Struggling to make ends meet as they have no over family, Iris is in desperate need for cash to pay for Raleigh's treatment.

In a meeting with Dr. Barden (Lawrence Gilliard Jr.) it seems that her luck might change. She's introduced to Shepard Lambrick (Jeffrey Combs) who invites her to enter a "competition." The details he gives are sketchy to say the least, but up for grabs is a lot of money which could not just help out the siblings, but maybe even change their life's.

Iris jumps in the car provided by Lambrick. On the way to the location of the competition, Iris drifts in and out sleep, dreaming about past events with her brother.

Arriving at the grand location, Iris is greeted by the butler, Bevans (Jonny Coyne) and meets her eight fellow contestants.

While each person taking part in the competition come from different backgrounds, they all have the common need for the life changing amount of money available to the winner. As they sit down to eat, their hosts, Lambrick and his son Julian (Robin Taylor) explain the rules. As you can imagine, it's a game of "would you rather," albeit, as it turns out, "EXTREME would you rather."

Lambrick gives one final choice to the group of contestants to take part or walk away before the game begins. They all stay, but when they realise just what's really involved, some of them have second thoughts if they should be there taking part.

Now stuck in a deadly and sadistic game, will Iris' need to help her brother overcome all the obstacles in her way or will she fall short of the mark? Only the strong will survive in this version of would you rather!

The first and only thing that bugged me about this movie was Shepard Lambrick, or rather the actor who played him. I was racking my brain where I'd seen him before. It wasn't till writing this that I realised it is of course, Jeffrey Combs, Mr Re-Animator (1985) himself!

Anyway, I digress, back to the actual film. It starts off pretty slow, following the story of Iris and her brother, but once the game is in full swing, this is where the fun begins. The characters involved in the game aren't given much of a back story, but this is a good thing, as what is revealed makes you think for yourself, creating your own theories.

Although Brittany Snow's performance seems mediocre at first, she really comes into her own towards the end of the film. Combs is sophisticatedly sadistic throughout, supported by the subtlety barbaric Jonny Coyne. The rest of the cast provide solid support.

The ideas of the each round in the game are brilliant and become more extreme and imaginative the further it goes on. It really does put you in film, thinking to yourself "what would I do this situation." The further I got into the movie the more I enjoyed it and with a fantastic twist ending, it has made the film one of my favourites of year so far.

If you want a fun ride with a seriously sick twist to it, then this is a movie worth watching!