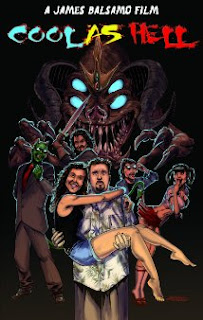 Well, where do I start with this one? Beside it being completely bat shit crazy, I should have hated this movie, but I have to admit that it kept me insanely interested with a permanent smile on my face!

The story follows Rich (James Balsamo), a happy go lucky comic book store employee that doesn't have that much luck with the ladies. He lives with best friend Benny (Dan E. Danger). Their basic role in life? Get high, get laid!

Life is pretty simple till Rich bumps into a demon called Az (Billy Walsh). Az is a low ranking demon, but seems loads of fun as he helps Rich and Benny with there girl worries. In fact Az is a bit of a party animal.

In the meantime, Rich meets Ashley (Lauren Adamkiewicz), a fellow comic book nerd. The only thing wrong, she has a complete asshole for a boyfriend, Sal (Frank Mullen), who just happens to be a loan shark type gangster.

In between having fun with Benny and Az, Rich has fallen for Ashley. But there's now another complication. When Az came through from Hell, he left a portal open. So of course, there's also zombies and a soul eating beast on the loose that Rich has to deal with!

So the simple life Rich once knew is no more. He now has to avoid the crazy boyfriend, save the girl and even save the world. All that just to get laid? Yeah, why not?! Sounds like an awesome night out. 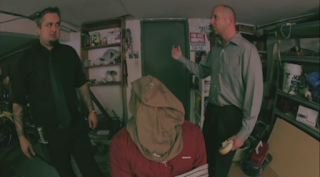 OK, so let's get the reasons why I should have hated this out of the way...

Most of the acting was either poor and/or over the top. The script seemed to have a mind of it's own and wondered of somewhere, away from the direction it should have been heading in. It had a lot of random scenes thrown in that really didn't add anything to the plot. And with it being a very low budget indie, the effects and scenes where beyond B movie cheap.

Now, as I said at the start, "it kept me insanely interested with a permanent smile on my face." Why? Even though it went off on a bit of a tangent, what I was seeing in front of me somehow kept me watching. This was mainly due to some of the characters involved. I also have to give great credit to James Balsamo for certain parts of his writing. There was moments of perfect comedy timing. Certain characters stood out that were written so well that I didn't have care about the plot to enjoy the movie. These were Az and Sal, played by Billy Walsh and Frank Mullen, that provided me with the most entertainment. Out of the whole the thing, acting wise, Lauren Adamkiewicz gave the most believable performance.

It also has some cameo performances from the likes of genre legend Tom Savini (Dawn of the Dead [1978], From Dusk Till Dawn [1996]), rocker Andrew W.K. (Jackass OST) and Laurence R. Harvey (The Human Centipede II [2011]) among others.

Let's not forget that Balsamo not only played the lead, but also did special makeup effects, wrote, directed, edited and produced this film. This is the first of Balsamo's films that I've seen, although he has previously released Hack Job (2011) and I Spill Your Guts (2012) and has the up coming Mystery Meat (2013) in pre-production. What I would like to see from him is something more serious. I believe he has the necessary skills to write something cleverly witty that could also contain a deeper substance as regards the frights, and not just the comedy side of things.

I'm going to have to go down the middle with this one, it's not the worse film I've seen and it's certainly not the best by any stretch of the imagination. I want to say it's awful, but I just can't as, yes, it was cheap and cheerful, but it was also fun, it did entertain me (even though I had no idea what was going on at one point), I loved a couple of the characters and the soundtrack was pretty cool. And that's why...