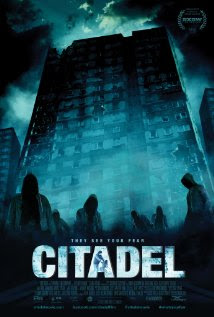 Tommy (Aneurin Barnard) and Joanne (Amy Shiels) are ready to move out of their crummy apartment in a rundown block. Not even the elevator works correctly. Tommy heads down to load a taxi with their belongings, leaving his pregnant wife standing outside the apartment.

On the way back up, as the elevator reaches his floor the door won't open. looking through the window of the elevator door, Tommy sees three hooded youths walking towards Joanne. He keeps tapping the button to open the door, but to no avail.

Without warning, the trio of hoodies attack Joanne! Now frantically pushing the elevator button, it starts to move back down to the ground floor. When he comes to a stop, Tommy has to force the door open himself. Rushing up the stairs in an attempt to save his wife, he finds he's to late as the gang flees the scene leaving Joanne on the floor, bloody and unconscious with a needle sticking out of her stomach.


Joanne is rushed to hospital, where the baby is delivered, healthy and well, but Joanne is left in a coma. Now living in a house, but in the same area, Tommy is left distraught by the event and develops agoraphobia. The young father is seeking help though, through group therapy and the support of a nurse, Marie (Wunmi Mosaku). The months pass, but Joanne's condition only gets worse and she passes away, leaving Tommy to fend for himself and their daughter. At Joanne's funeral, Tommy is warned by the priest (James Cosmo) to leave the area saying "you know they'll come looking for her."

Tommy has already made arrangements to leave the city. After handing in the keys to the house to the local council, he heads for the bus to take his his daughter away from the horrible area. But he doesn't make it on time and misses the bus!

Now he has to make his way back to the house as it's the only place he knows he can stay for the night. Tommy forces his way in, which means that he can't lock themselves in. As the night draws in, the mysterious hooded gang makes an attempt to take the baby. To Tommy's relief, Marie pays them a visit and seeing the state he is in, she takes father and daughter to stay at her place.

Looking for answers, Tommy goes to see the priest. But the answer he receives is more than he can take in. The priest reveals the true identity of the youths that are attacking people and taking small children and introduces a young boy called Danny (Jake Wilson).

The very next day, Marie decides to help Tommy with his agoraphobia. They head out and walk down an underpass. What happens next forces Tommy to face his fear, with the help of the priest and Danny. 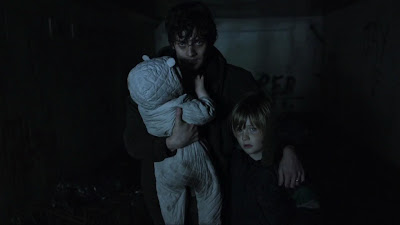 Citadel did the rounds at films festivals last year from the US to as far as South Korea and also picked up a number of awards, one of which was the "Audience Award" at SXSW Film Festival. It's not hard to see why.

This Irish production is a very atmospheric and creepy slow burning movie. The cinematography reflects the mood throughout. The dark feeling of the film is helped brilliantly along by a very believable performance by the lead actor, Aneurin Barnard. The film revolves around his character and the traumatic experience, which means he carries the whole thing on his back with not even a hand full of supporting cast members, but he pulls it off without any doubt.

Ciaran Foy directs from his own script and delivers in both areas. The movie is more than a horror, it also deals with loosing loved ones and tackles the very real condition of agoraphobia in a serious and well represented manner. This all helps you connect with the story and the characters within it.

Citadel is an original, unsettling and harrowing film that has real world application. It will give you something to think about afterwards. And quite frankly, it puts some of the big budget stuff to shame!