In a world obsessed with celebrities, with social media at our finger tips, the paparazzi snapping shots of the rich and famous and to the extreme of stalking, just how far do you think people would go to be close to their favourite celebrity?

Antiviral takes that next step as it's set in a time where the average Joe off the street can feel at one with their idols. The Lucas Clinic provides their clients with the ultimate step in fandon. Along with other clinics, they provide viruses directly collected from your favourite star and inject it into you, for a price!

Syd March (Caleb Landry Jones) is a leading technician at The Lucas Clinic and one of the perks of his job, although security is tight, is being able to inject himself, with whatever or whoever he fancies.

He "likes to keep things interesting" as well as extracting and processing the virus (when he gets home) in order to pirate and sell it on to outside parties. One of these parties are a local butcher (of sorts), owned by Arvid (Joe Pingue), that grow stem cells of the celebrity using the virus itself.

Syd finds himself in a situation that work colleague Derek (Reid Morgan) would normally do. The boss, Dorian (Nicholas Campbell), has asked him to go collect a sample from their ill yet beautiful poster girl Hannah Geist (Sarah Gadon). Too good to miss the opportunity, Syd high tails to a restroom and injects Hannah's blood directly into his own arm, which makes him rather ill. After passing out for a while, Syd wakes up to the news that Hannah Geist has died from the very virus he has coursing through his body.

On the path to saving himself from imminent death, while being seriously affected by the virus, he gets involved with the Geist family physician, Dr. Abendroth (Malcolm McDowell). Syd now finds himself in the dangerous and viscous web of the virus pirating underworld and big business corporations. But will he find a cure in time and unravel the mystery surrounding Hannah's death? 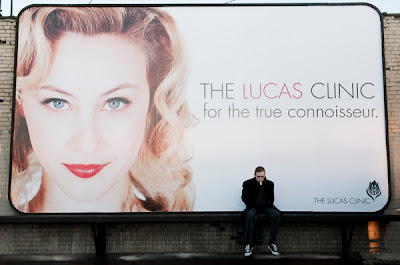 First of all, if you are squeamish about needles then consider yourselves warned!

Son of David Cronenberg (Scanners, The Fly, Videodrome) , Brandon Cronenberg makes his feature film debut, in both the writing and direction department. Cronenberg actually re-edited the film after a showing at the 2012 Cannes Film Festival to make it tighter, trimming nearly six minutes out of the film. The revised film was first shown at the 2012 Toronto International Film Festival, where it was a co-winner of the festival's Best Canadian First Feature Film award. It's not hard to see why it got an award.

What we have here is a power look at the lengths we might go to worship celebrities. The movie has a very slow pace, certain horror fans may find it boring, but for me it was very interesting and the pacing helped grasp the whole concept.

Delivering a very believable performance throughout was Caleb Landry Jones. His pale slender frame added to the realness of his illness. Although not having a great deal of screen time, Malcolm McDowell plays his character with underlining seriousness, something I haven't seen from him for a while. So it was good to see Cronenberg use him in such a role. The rest of the supporting cast added extra quality to the film, making the script come alive.

With a story that has real world connotations and the fluid direction, it really kept me involved, wanting to know more and connecting me with each character. This thought provoking movie has an air of dark realism and should keep you thinking about the message it delivers. An all round solid effort from David Cronenberg.