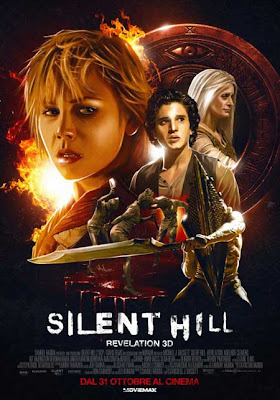 Silent Hill: Revelation picks up 6 years after the events of the first film. The young Sharon is now 18 years old and now known as Heather (Adelaide Clemens). She's been on the run since she was a child with her father Harry (Sean Bean). Heather can't remember what happened to her as a child and suffers with constant dreams of Silent Hill, even though she has no clue as to what these dreams mean.

They have both just moved into a new place and Heather is about to start a new school. But she's not the only one to be the "new kid" in class. Fellow student Vincent (Kit Harington) is also starting his first day and tries to make friends with Heather.

Things are not sitting well with Heather though, as she's being followed by a man she doesn't know. In an attempt to loose the man she heads to a shopping mall and arranges to meet her dad.


But the man catches up to her and reveals himself to be a private detective named Douglas (Martin Donovan) that's been hired to find her. He knows her by the name of Sharon though. He goes on to tell her that the people responsible for hiring her are not to be messed with and warns her to keep running. In the meantime, her Father Harry gets an uninvited guest.

After the ordeal with Douglas she escapes the mall and bumps into Vincent. Heather is now seeing things and fears for her life which is made worse by the fact that she can't get hold of her father. So she heads home with Vincent in toe, only to find that her father is gone and a bloody message with a symbol is left on the wall of the living room. She recognises the symbol and looks for a wooden box the her father kept. The box contains material about Silent Hill.

Heather decides to look for her father with Vincent's help. So they start their journey towards Silent Hill. Stopping at a motel for rest, Vincent has a secret to tell and tries to put off Heather from going to Silent Hill. But the same person who took her father turns up and hours later Heather finds herself waking up in a strange place. It doesn't take her long to realise she's already in Silent Hill! Let the nightmare begin...

Being a fan of the first film I eagerly awaited this sequel. Sadly, that eagerness was met with disappointment. The sequel was rather inept. All of things I liked about the Silent Hill was lacking in it's successor!

OK, it is worth mentioning the SFX work. However, it is the only real redeeming quality the film has. Even though the effects are good and we're introduced to new monsters, some of the creatures we saw in the first film, namely Pyramid Head and the Nurses, don't make the impact that they made in the first movie. They somehow lacked that creep factor. In fact, the movie as a whole lacked that real feel of darkness that is Silent Hill.

The film had some big names in it too. Sean Bean, who returns in the sequel was far below par compared to all his previous work. Carrie-Anne Moss (The Matrix franchise) and Malcolm McDowell (Halloween, Suck, Silent Night) failed to add any vigour to the project. Even Kit Harington, a relative new comer, was way under the standard of acting he's shown in the astounding Game of Thrones. Radha Mitchell makes a very brief and rather pointless appearance. So on top of all that, Adelaide Clemens has to carry the whole film on her back and unfortunately she wasn't quite strong enough.

The worse thing about the movie was the story itself and the direction. The whole thing felt rushed, like Michael J. Bassett tried to throw as much information, including flash backs, into the film as possible instead of developing the plot. It lacked depth, any twists and turns and frights, which makes me thing that this was only made [in 3D] for the effects. Added to this poor combination was the score, or rather, the constant use of the one particular track (which you can find here) that also appears on the soundtrack of the first movie. By the end, it just got annoying!

If you're a fan of the Silent Hill movie then like me, I think you'll dislike the sequel. If you didn't like Silent Hill, then I guess you'll hate this one!