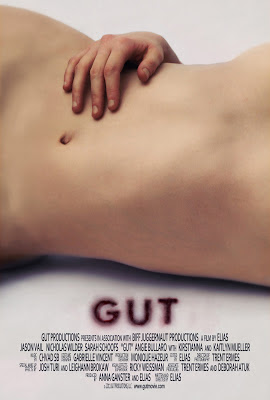 Tom (Jason Vail) seems to be leading a normal life with wife Lily (Sarah Schoofs) and their daughter Katie. He lives the normal nine to five day in an office with fellow work colleague and best friend Dan (Nicholas Wilder) before heading home to have dinner with his family each week night.

While on a lunch break, Tom and Dan head to a local diner for their usual burger and fries. Dan has also taken a shine to a waitress there, Sally (Angie Bullaro). Dan invites Tom round to his place for a horror movie night and some beers like they use to when they were younger. But Tom makes an excuse saying he has plans to take his daughter to the cinema.

This doesn't deter Dan from inviting his best friend around the very next day as he has a mail order film that he found through the Internet.

Tom now agrees, so straight after work they head to Dan's place and sit down to watch the DVD. Both are in utter silence through the short film. When it's finished Dan asked Tom what he thinks of what they just saw.

Completely disgusted by the film's content's and quite freaked out by it, Tom leaves in a hurry! That night Tom can't sleep. Over the next couple of days his home life starts to suffer due to the disturbing film. While at the diner, Dan reveals he has more of these DVDs to watch, which only starts to put a wedge between their friendship.

Now Dan is left to his own devices, becoming more obsessed with the subject matter of the DVDs. As he sits alone in the diner, he finally plucks up the courage to ask Sally out on a date which works out rather well for him, at first! But when Dan starts to miss a lot of work, Tom becomes worried for his friend. Seeking to help Dan, what Tom hears and sees next is more disturbing than he could imagine. Now worried for the safety of his family, he becomes more paranoid and conscious of how the film they shared together is effecting real life. What happens next will effect his life forever! 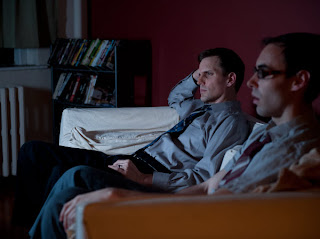 My initially thoughts after watching this film were only elaborated by writing this review and thinking more in depth about the message it presents.

I'm sure, as horror fans, we've all seen a film that we found disturbing, that maybe we shouldn't have watched or maybe after watching it, we certainly won't be watching it again! And then there's the impression it leaves upon us, whether it's only for a short time after viewing or days and maybe even months after. The film also looks at how friendships can grow apart as we get older and how maybe our interests change in the process of becoming adults and having our own family.

That said, I think the script was well written by Elias which, along with his direction, made for a more realistic horror movie. OK, so this a what we know as a "slow burn" movie, in fact it's very slow throughout as nothing major happens till about fifty minutes in. I can see a lot of people not liking this. Hell, it wasn't till I sat down to start this review that I thought it was a good film! This is the kind of movie that you need to think about. It's not in your face. It does require you to think about what you are seeing. In the process it makes you think how something like this would effect your own life, thus giving it the realistic feel.

As for the acting, at first it seems a bit mediocre, which didn't help the pace of the film at first, but by the end of the film you feel a certain connection to the main characters, whether it be Tom, Dan or Lily. The pace of the film is helped along by a pretty eerie score and the practical effects add to the realism. It is predictable in parts, but it's worth seeing how the characters react to the situation they are in.

However, as I said before, not everyone will like this, but I would recommend this movie to film enthusiasts that have an eclectic taste in horror and that are not just your average horror fan.