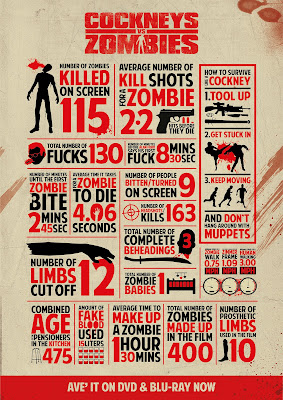 A JCB on a building site is digging up the ground when the operator is told to stop as it's uncovered something. What seems to be a bunker type structure has an entrance but it's been sealed, by King Charles II in 1666!

There's no prizes for guessing for what happens next!

The two builders smash there way into the sealed room to find a load of skulls and bones, suggesting that this was some kind of burial chamber. As they stumble around in the dark one of the a dead bodies, with barely any flesh on it, drags itself up and takes a bite out of both workmen.

After the opening scene follows a very cool title sequence with a "Frank Miller / graphic novel" (Sin City) feel to it which actually gives it a touch of class.


The story then follows brothers Andy and Terry (Harry Treadaway and Rasmus Hardiker) as they go about planning a bank robbery so they can support their grandad Ray (Alan Ford) as the retirement home he is living in is being closed down.

Teaming up with their cousin Katy (Michelle Ryan), Mental Mickey (Ashley Bashy Thomas) and Davey (Jack Doolan), they all head to do the bank job. This isn't as simple as it sounds, specially with someone called Mental Mickey tagging along! After setting off a silent alarm, the police turning up outside the bank is the last thing they need to worry about though. Their first attempt at fleeing the scene is halted by the police, but after regrouping back inside the bank, the second attempt leaves them to find the cops dead or gone. Is good fortune on their side? Maybe not, as there's now Zombies roaming around!

While the gang drive to safety, the old cockneys at the retirement home also have their hands full with the undead. But with the old hard nut Ray leading the way the well seasoned codgers fight back and barricade themselves in.

Will the bank robbing misfits get to their grandad in time to save the day and while doing so will they survive in between? 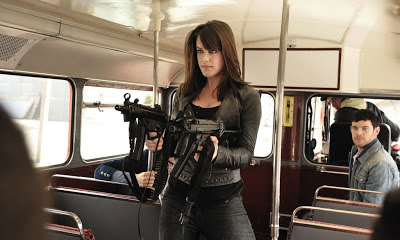 There's no surprises in this movie, it's pretty standard Zombie issue stuff. If your British, you might like it more than the Yanks. For those in the know, think Snatch (2000) crossed with Shaun of the Dead (2004) but with way lower quality acting, direction and writing.

The lead cast of Treadaway, Hardiker and Ryan gel well together and provide some decent comedy moments along with some fun Zombie killing action that's gory enough to keep blood thirsty fans happy. The stand out character for was Ashley Bashy Thomas as Mental Mickey. His name says it all!

Alan Ford still hasn't put in a better performance for me since his role in Snatch though and it was strange seeing Honor Blackman (most famous for playing Pussy Galore in the Bond film Goldfinger (1964)) but she did her fair share of Zombie beating too!

If you want a bit of fun and bloody entertainment and something to pass the time on a friday or saturday night in, then it's worth giving a go.

Cockneys vs Zombies gets a generous 6/10