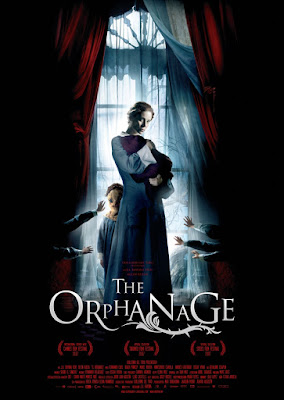 
The plot -
Laura, a former orphan, raises her adopted son Simón together with her husband Carlos in an old house and former orphanage where she was raised. While at the orphanage Simón tells Laura that he has five invisible friends which she believes are a product of his active imagination. Laura decides to reopen the orphanage to cater for disabled children and throws a party. During the party Simón tries to persuade Laura to go and take a look at his friends cabin but she's too busy. Later on she sees a mysterious masked boy and realises that Simón has also disappeared. Laura feels the presence of other people in the house and months later Laura invites a team of parapsychologists to try to unravel the mystery. 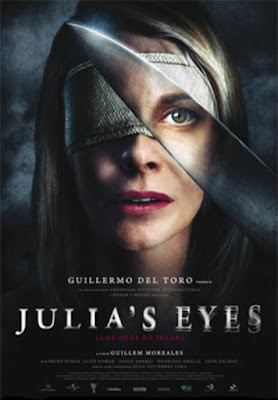 
The plot -
After the death of the blind Sara, who hung herself in the basement of her house, her twin sister Julia suspects that she was actually murdered. Julia has a degenerative problem in her eyes and is losing her sight and she temporarily moves with her husband Isaac to Sara's house to arrange her funeral. Julia goes to the Centro Baumann for blinds where Sara frequented and she learns from the others blind users that Sara had a boyfriend. Julia is chased by a mysterious man but the police inspector Dimas does not believe on her. Julia follows the last steps of Sara trying to find the identity of her secret lover. Julia is surrounded by deaths and weird events while she loses her sight.


The first thing you'll notice is that Belén Rueda is the lead actress in both these movies but the more interesting point these movies have in common, besides being Spanish, is that Guillermo Del Toro is a Producer on both and you can tell he's had a certain influence on them. That influence being the underlining tension that is set in both movies.

The Orphanage has it's creepy supernatural side whereas Julia's Eyes is full of psychological suspense but both still have there jumpy moments too and are well written and directed with good performances from the cast. Both are more on the thriller / suspense side of horror, so no mentionable blood and guts. They have the fairly slow pace of most foreign horrors but that doesn't effect the movies in a bad way as these types of horrors don't need to be "in your face". So lets separate the two and take a closer look.

The Orphanage feels almost like it could be a family film at first, but as the tensity increases as the movie goes on, a creepy kid in a mask appears and with the introduction of Aurora, the medium brought in to help find Simón when the police can't find him, things take a turn to the supernatural side.
It really is a slick and quietly chilling piece of work with a surprisingly happy ending. 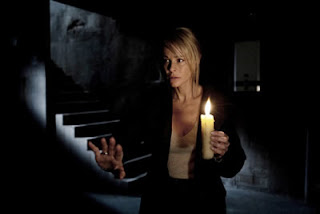 Julia's Eyes gets stuck in from the outset with the opening scene setting the standard for the entire movie. With fading sight, being followed, a few twists and turns, you really do get drawn into Julia's world of turmoil with possibly danger around every corner.
It has one of the best scenes in a horror movie I've seen for a long time, involving a pitch black room, the heroin, the villain and a camera flash. It should have you on the edge of your seat, something that is lacking in many mainstream American horrors.

I enjoyed both of them, but for me, Julia's Eyes was just a little better.

Check out the trailer for each movie below...