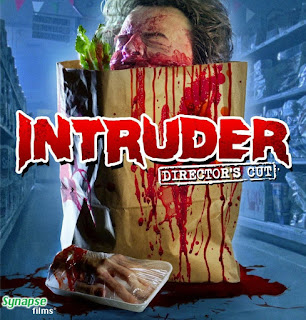 
The plot -
As local late night supermarket is shutting up and the night shift are starting to restock the shelves ready for the next day, the ex-boyfriend of a check-out girl at the supermarket returns at closing time to make trouble. They quarrel and the boyfriend is ejected from the store. After they lock the building up to take inventory, an unseen assailant begins to stalk the workers and the store owner and kills them one by one. The killer dismembers his victims, leaving body parts around the store, and the survivors must eventually find a way to escape with their lives. 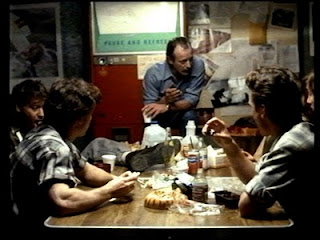 Delving deep into the Vault for this one, the first thing I noticed, besides Sam Raimi and Bruce Campbell making cameos, is that Lawrence Bender co-wrote and produced this movie. If you don't know who he is, well, he's only produced everything Quentin Tarantino has directed! 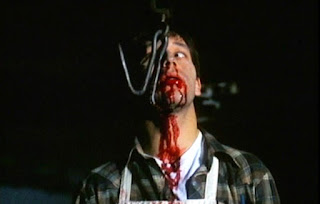 Locked away in an empty supermarket, on the night shift, what could possibly go wrong?

Well, pretty much everything for the characters in the story, but as for the movie it's self, it's so simply brilliant!

This movie is truly an unsung classic of the 1980's with great kill scenes and special effects that are damn good for the era.

OK, the acting isn't great and it's predictable. But only predictable because I've seen so many horror movies. But that didn't make a difference on how much I enjoyed it. When I watch an old movie like this, I put my mind frame back to when it was made, so my opinion isn't effected or compared to modern horror movies.
Everything fits together perfectly in this, the comedy moments, the tension, the bloody gore, right up to the ending and it was directed well considering the lack of talent of some of the cast!


You can definitely see that this is one of those movies that paved the way for horror movies of the late 1990's and 2000's. If you haven't seen this then I recommend doing so. Baring in mind that I'm 34 now, and I've watched around 200 horror movies, just in the past 6 months, I was still rather impressed by Spiegel and Bender's effort. That leads to one thing...