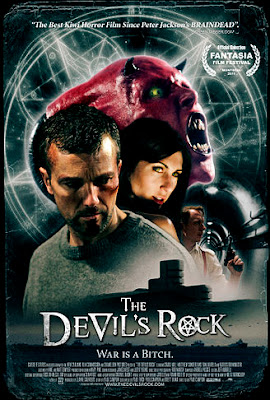 The plot -
The Devil's Rock , June 5, 1944. A crack kiwi commando team, Captain Ben Grogan and Sergeant Joseph Tane, are sent on a top secret mission to destroy gun emplacements inside German occupied territory in the Channel Islands on the eve of D-Day.

They are diverted off their landing point by strong currents, but eventually find themselves near the entrance of an ominous German bunker. After placing explosives on the gun turret, they surprise and kill a German soldier fleeing from the bunker pleading for help. The screams of a woman follow from inside and Grogan makes the decision to go on an unauthorised rescue mission, leaving Tane behind.

Once inside, Grogan encounters more than he bargained for, a scene of unworldly carnage, where only a mysterious Nazi officer and beautiful but Devilish captive remain alive.


This was one of those horror movies where I didn't really know what to expect, so I wasn't expecting much and it was a good job too. Not that it was bad or poor. The main thing was that it wasn't really an original idea. Nazis trying to use dark forces to win the war, Hellboy springs straight to mind. 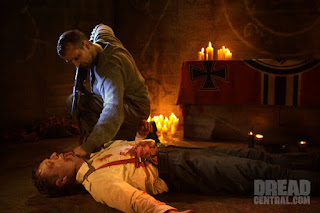 It had a couple of eerie moments, all be it slightly eerie, of dark tunnels and distant screams.

The relationship between Kiwi Captain and the German officer worked well, with a better script and a great director, one of their scenes together could have been "Tarantinoesque." But it just wasn't quite good enough even though the acting wasn't bad. 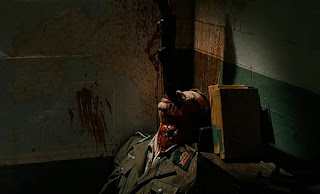 There's no CGI to speak of other than the very small amount used for the demon, which keeps in line with the rest of the movie as not needing any.

Blood and gore? It's not in your face, there's a few dead bodies, dishevelled corpses, discarded guts and innards laying around and blood splattered up walls, it all looks pretty cool.

My overall thoughts, it wasn't bad, it wasn't good, it was just, average really. Is it worth watching? Yeah, it wasn't a waste of time, but try this on a week night if you're bored and there's nothing else worth watching.

New Zealand's The Devil's Rock gets a rock solid 5/10