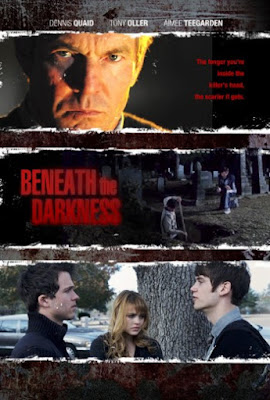 
The plot -
Ely is the town's widowed mortician, upstanding resident to some, creepy old guy to others. After watching their best friend die, when braking into Ely's house to investigate ghostly goings on, Travis, Abby and Brian struggle to expose the local hero as the vicious killer and keep from becoming his next victims. 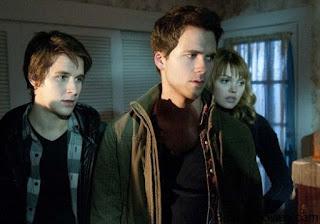 This one is gonna be short and not so sweet I'm afraid!

There's nothing more, plot wise, to know about this movie, it really has nothing more to offer.
It starts promising with Dennis Quaid revealing himself straight away as more than meets the eye but it really does go down hill from there.
There is moments where you think Quaid really has played the creepy guy well, then there's moments that just ruin that. 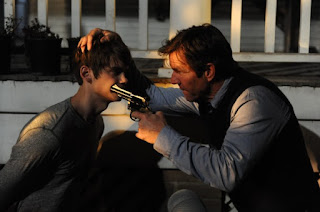 There was only two scenes that stood out and they involved a head stomp and a knock out blow, they only lasted for a split second.
The supporting cast did a pretty decent job but the script let it all down.

It was beyond predictable!
It was heading towards being a very average then the very last scene, with Quaid, just destroyed the rest of the movie making it a poor attempt at a horror / thriller!


The big question, as always, is this worth watching? No. It has nothing new to offer in anyway shape or form. Really, don't waste your time.

Beneath the Darkness under performed with a 4/10