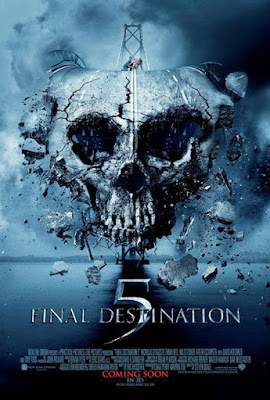 The plot -
A group of co-workers are gathering for a company retreat. The group includes Sam, who desires to have an apprenticeship in Paris; his best friend Peter, Peter's girlfriend Candice, and office assistant Olivia. Along for the trip are Molly - Sam's girlfriend, Peter's co-workers Isaac and Nathan, and their boss Dennis. While they cross the North Bay Bridge, Sam receives a premonition that it will collapse when their bus is still on it, killing everyone apart from Molly. In a panic, he grabs Molly and gets off the bus. Peter, Candice, Olivia, Nathan, Isaac, and Dennis follow. The bridge collapses as Sam foresaw, but this time they have been spared. Following the memorial service, local coroner William Bludworth mysteriously warns the survivors that they cheated Death. They ignore his warnings and move on with their lives.

If you've seen the first four movies ( if you haven't then watch them all before this one ) then the rest of this film is pretty clear as to what direction it takes!

I loved the first Final Destination. It was a refreshing and original movie. The three that followed were not as good, as most sequels are. But there was something different about this one. Sure, it had the same set up - Cheat death, die in over elaborate, bloody and painful ways.

The difference was the misdirection of how the death scenes played out. It was done superbly yet they were so blunt. The gore was just the right amount, not over the top, but enough to make you think or even shout "Whoa, Ouch!" 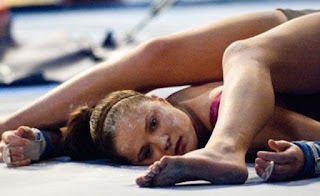 "You heard the news, they say it was natural causes"..."They are more like supernatural"


I actually enjoyed this, even though the slower drama parts of the movie only just kept your attention between the action / death scenes.

The ending was fantastic. You don't see it coming throughout the film. Only at the very last minute do you put things together and it should still make you smile!

Tony Todd ( pictured below ) features more in this movie which is always good to see.

If you like the first movie, even if you didn't like the rest, the fifth instalment is still worth watching.

For me, and this isn't a bad thing, the way it ends was my favourite part. It was perfect!


Number 5 could be the final part of the franchise, but probably not, even though with the way it ended it should be.

Final Destination 5, if not just for the final scene, gets a 7/10