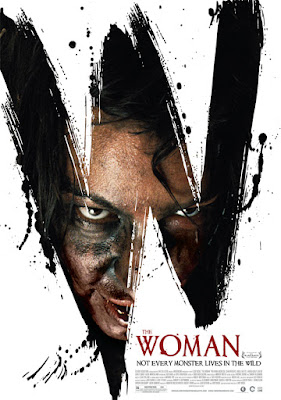 The plot -
The film opens with a psychedelic montage of the woman's life in the woods inter cut with images of her new born child lying in a nest of twigs. The baby is bathed in a pool of blood being lapped up by a wild wolf. The woman is a feral animal who was once part of a pact of predatory cannibals who lived like cavemen in the woods of Maine outside of a serene upper middle class suburb. She's a monster, a wolf living in the skin of a human. 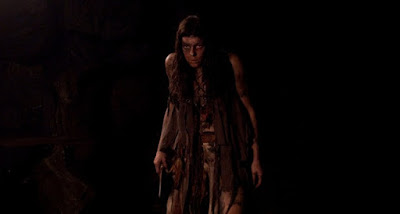 It then cuts to very typical-looking American family at a barbeque. As the story goes on, we realize that this isn't the case. 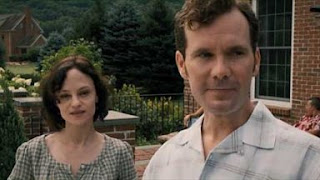 The father, Chris, goes out hunting one day and finds the wild woman living deep in the woods near his home. So he does what any loving father and husband would do - he captures her, chains her up in his cellar, and brings the family in to help take care of and civilize her. 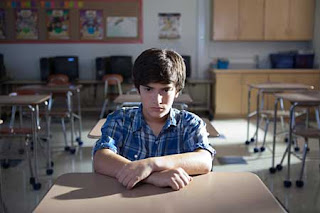 Sean Bridgers gives an effective performance as Chris Cleet (although he constantly reminded me of Will Ferrell), a family man with his own a business and penchant for hunting.

The constant fear in Chris's wife and daughters' eyes foreshadows the brutality that follows. Angela Bettis also gives a strong performance as the meek and weak willed wife who enables Chris' horrific actions which in turn inspires their son to unimaginable deviancy. 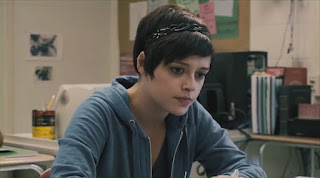 Rather than being a film about a man's hatred of women and his sick and violent manipulation of them, the film becomes a battle of wills, a twist on horror genre conventions where two evil, destructive forces battle each others.

One decisive attribute of the film is its use of music. Lucky interjects poppy rock tunes through out the film. Original songs written for the film featuring the lyrics that are synchronized to the action on screen play through out much of the running time. 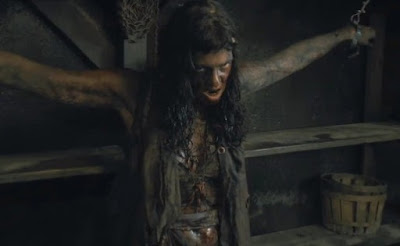 Pollyanna Mcintosh plays The Woman in a powerhouse performance that carries the film through many of its shakier moments.

Finishing off with a nice little twist near the end, this is one to watch if you like your horror sick, twisted and disturbing.

Keep watching till the end of the credits for a short piece involving the youngest daughter which is actually quite sweet!