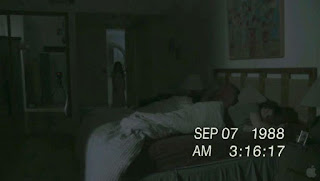 The plot - It's 1988 and young Katie Ray and Kristi Ray are living with their mother and her boyfriend when things indeed start to go bump in the night. Since their mother's boyfriend is a videographer by trade, he soon decides to set up cameras around the house in hopes of figuring out why all the weird stuff keeps happening.

This was the first out of the 3 films I went to the cinema to see (I saw the firt 2 on dvd).
I don't really know if this made a difference or not, as being the 3rd installement was always going to be predictable. "Did you hear that?" "What's that noise?" etc. You know something is coming or going to happen, but on what level?

I'm a fan of the first two, I have to admit, they scared the crap out of me and freaked me out. Something a horror movie hasn't done since watching Poltergeist when I was around 11 years old, and I love horror movies. But then, I believe in this kind of thing!

How is this film different from the fisrt 2? Well, the good points - "things" start happening abit quicker, when they go bad they go bigger and badder and the reason behind the huanting and why it started is revealed. The bad points - we know that nothing really bad happened to the 2 little girls because we've seen the first 2 films where they are grown up and like I mentioned before, it was predictable. 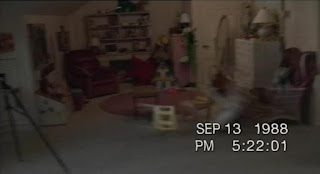 Did it scare me like the first 2 films? No, but it did make me jump once or twice. I found that I wasn't connected to the main charaters (Julie and Dennis) as much as I was to Micah and Katie, which was the same for the 2nd film (altough I found it more scary). However you do feel for the kids and how scared they get. You do get a moment of "shut the f**k up you silly cow" when the mother refuses to listen to the boyfriend about what he's seen on tape.

Is Paranrmal Activity 3 worth watching? Yes, but you do have to watch PA and PA2 first.
Is this film for everyone? No! The franchise as a whole has had alot of mixed reviews, somewhat more than any other I've seen or read about. I've heard things like "boring" and to put it bluntly "sh*t." But then on the other hand I've seen PA3 praised by a writer who hated the first 2 films!!

More simply put, It's like Marmite - You either love it or hate it! Or in this case and mine, I like it (but i do hate Marmite!).