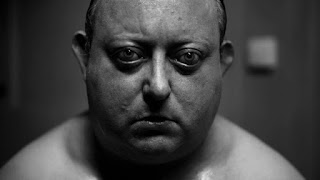 The plot - Martin is a mentally disturbed loner who lives with his mother in a bleak housing project. He works the night shift as a security guard in an equally grim and foreboding underground parking complex. To escape his dreary existence, Martin loses himself in the fantasy world of the cult horror film The Human Centipede (First Sequence), fetishizing the meticulous surgical skills of the gifted Dr. Heiter, whose knowledge of the human gastrointestinal system inspires Martin to attempt the unthinkable, creating a 12 person centipede!

Shot in black and white, this really does add to the feel of the film, making it dark and dirty which tied in with the main character Martin Lomax who was played so simply and superbly by Laurence R. Harvey. To look at Martin, you would describe him as being a small, fat, sweaty, greasy, troll like little man, who also suffers with asthma and has to "puff" on his inhaler alot. He also gets referred to as a "midget" a couple of times in the movie and there is the odd point when you kind of feel sorry for him. But then that all goes away when you hear the sound of a crowbar being dragged on the concrete floor as he's heading for one of his victims or when you see him rip a sheet of sand paper in half that you know (but don't see) he's going to use for masterbation while he's watching The Human Centipede on his laptop!

Very indiscreetly he goes about bashing the heads of the 12 people he needs for his Human Centipede, which includes the actress Ashlynn Yennie from the original film! As he starts the process it all gets very messy and very "bodge job" like, with Dodgy workmanship. Once complete he brilliantly dances around like the Dr. Heiter, recreating the original film. There is a scene with a pregnant woman that might be abit strong for some people, so watch out for that!

With lots more blood, gore and poo than the first film, Tom Six did what he set out to do with this film which was "make the first movie look like My Little Pony in comparison."