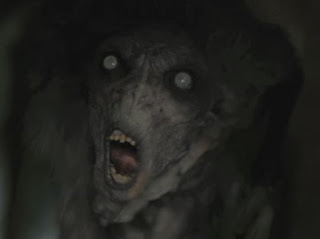 The plot - A young girl sent to live with her father and his new girlfriend discovers creatures in her new home who want to claim her as one of their own.

As a fan of Guillermo Del Toro I was looking forward to seeing this. However, although you can tell this film is produced and written by Del Toro you can also tell it was not directed by him! This was Troy Nixey second outing as a director and I have to say, other than the opening scene, I found it rather dull up till around the 50 minute mark. I like Guy Pearce, thought he was great in Memento and L.A. Confidential but he seemed abit lifeless in this. Katie Holmes was bland as normall which always seems to work for her anyway. The best actor in this film was 11 year old Bailee Madison who did a fantastic job as Sally and you could really feel the pain she was going through throughout the film and even though it wasn't really a scary film her performance made you feel scared for her.

As expected, the creatures, as small as they are, were classic Del toro with a good amount of creepiness and the set production was amazing. The art work is fantastic and the house in particular, the detail of the interior, all I kept thinking was "I'd love to live in that house" even with those things in it!

Not all was lost as the last 30/40 minutes make up for the rest of the film. If you like Del Toro than it worth watching.